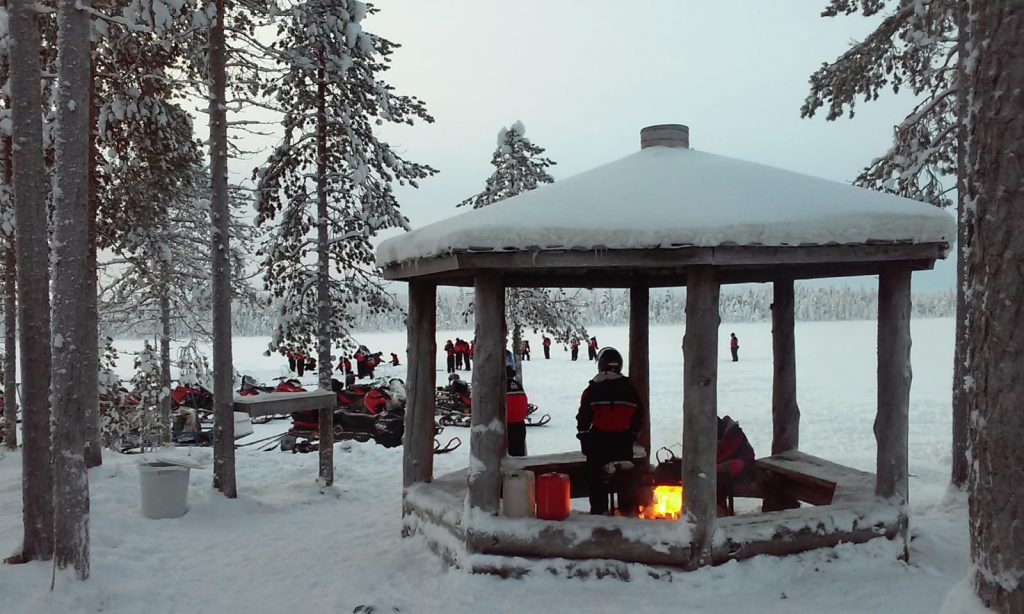 The adventure and outdoor education students at Humak UAS complete three internships during their studies. On their first year, the students intern at various ski resorts in Lapland. The three-month period begins in mid-November, right before the busiest tourism season of the year.

The internships generally begin with an orientation week, during which the students are instructed on tour guiding, customer service, and the local culture. They spend a lot of time outside, familiarizing themselves with equipment and test-driving snowmobiles around the safari areas.

Alisa Denisov, who worked at Lapland Safaris Rovaniemi, was put to a test soon as her internship began. On her first day of work, she led a guided bus tour for an international group of 50 people. The situation was challenging, but it increased her confidence going forward.

I was expected to give the group information about Lapland and the Rovaniemi area, and since it was only my second week there, I didn’t know much myself. It was quite difficult, but the experience prepared me for all the surprises that would come during my practical training.

During the busy month of December, the interns more commonly organize activities like tobogganing, mini snowmobiling, and husky rides. They also play the role of Santa’s elves to entertain the children at the resorts.

After the Christmas season is over, the students are employed as guides at all kinds of safaris, e.g., snowmobiling, cross-country skiing, and ice fishing.

Milla Lindström says that she gained invaluable knowledge by observing the more seasoned guides. She spent her internship at Lapland Safaris Levi, at the biggest winter sports center in Finland.

By mid-January, I had gained a lot of experience and professional skill. The best way to learn is to watch your co-workers closely. The older guides know so much that you can always learn something new, even if the program is the same as many times before.

Joonas Murole, who interned at Snow Fun Safaris in Ylläs, also found that observing senior workers was an especially effective way to learn.

After December, I worked as a guide in many different safaris. I always worked with more experienced guides. I was like a sponge, trying to soak up knowledge every chance I got, Joonas says.

Joonas enjoyed his internship greatly. He says that he would recommend working in Lapland during the winter season for everyone who is interested in outdoor activities.

A memorable winter in the north

People from around the world visit Lapland during the winter, hoping to experience some of the renowned magic of the region. Although the interns work in the resorts to develop their professional competence, they are not immune to Lapland’s allure either.

One of the nicest experiences I had was an Aurora Borealis safari. We were out on a frozen lake, and saw beautiful northern lights, which were moving around in the sky, flashing and lighting up. I am very happy that I had the possibility to be there and experience it all, says Alisa Denisov.

Emma Lehto states that for her — a Finn who spends every winter holiday in Lapland — an internship at Levi was a dream come true.

The biggest reward for me was to see people smile, laugh, and take photos after a successful safari. Sometimes people even gave us guides a hug afterwards! To me, that’s a sign that we did a good job. And all that Lapland magic helps, too.

The students evidently value the time they got to spend in the north. Working at the scenic resorts is a remarkable way for them to improve their skills as adventure educators. The internship is also an amazing opportunity for the international students to experience a winter in Lapland.