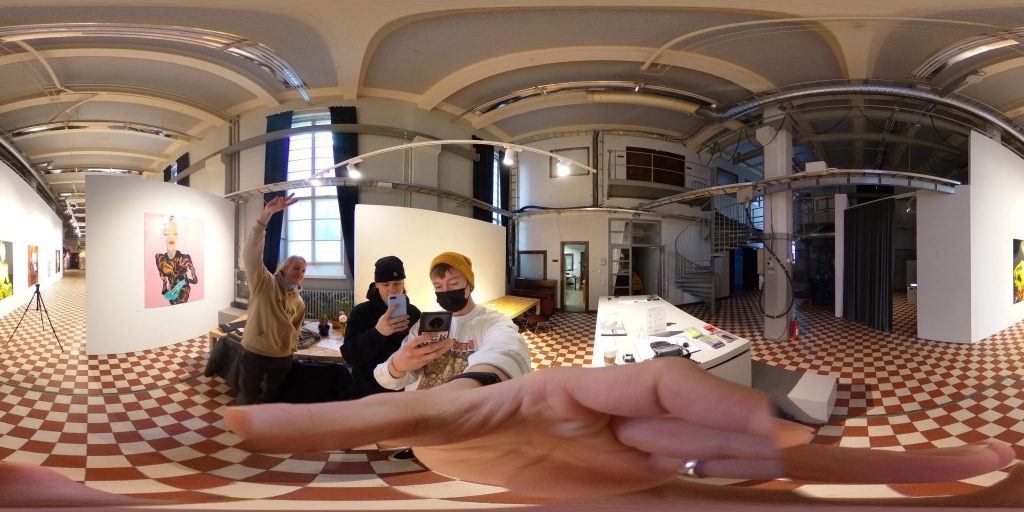 Cultural Management students Ron Forsman, Kasper Stigzelius and Aarni Valta went all out with one of their assignments. They really went above and beyond with their assignment, and for good reason! The ambitions of young people are often directed towards the needs of working life, in their studies they want to gain valuable working life skills by doing various different things. Thus, a virtual art gallery tour was born for Galleria Huuto.

The assignment was returned in the form of a link to the website of Galleria Huuto. The lecturer in charge of the course was understandably surprised, for the expectation was to just receive a couple of photos. The students had gotten a spark of inspiration to fully learn and immerse themselves in the world of 360° technology.

One Thought Lead to Another and Culminated Into a Virtual Tour

Aarni Valta is the person behind the gallery idea. Aarni was no stranger to Galleria Huuto, for he’d been touring various art galleries with his friends.

– I thought the inside of Galleria Huuto would be well suited for photographing, more so than the premises outside, says Aarni.

It was interesting to see how our plans began to grow greater and greater, Ron Forsman continues.

– Once we figured something out, we always started to wonder how it could be improved further. Could we create a complete virtual tour? We thought that this was worth doing well for the experience alone.

This was our chance to learn all about 360° content.

– Turning our assignment into a bigger production was worthwhile. It was surprisingly effortless to create a virtual tour, it is not at all as complicated as you might think, says Ron.

Aarni felt that the concept was intriguing, he is interested in creating similar projects in the future.

– All in all, 360° productions are not used all that much, considering how long the technology has been around.

The project could be continued further if Galleria Huuto receives funding for new projects.

Humak provided the students with a camera, a camera stand, and software for editing, as well as equipment familiarization. The filming started as soon as the students had gotten to know their equipment.

Shooting video wasn’t so easy because of some technical limitations. Thankfully the team already had technical skills and were familiar with editing programs, so the challenge was not insurmountable.

– The project proved to be both easy and challenging at the same time. For example, Ron had issues getting the software to work properly. No problem was too big to handle, but we encountered many small obstacles, Kasper Stigzelius says.

Many workarounds had to be implemented in order to get the videos to work as planned, Ron says. Instead of ThingLink the videos were uploaded to Youtube. The videos could’ve turned out even better than they did, if we had the full version of the software at our disposal, Aarni adds.

Everybody gave it their all. A common passion for the project acted as the driving force behind the project.

– The entire project seemed to move along at a fast pace. Suddenly we realized that the day of filming at the gallery had already arrived, then just as fast the project had been fully filmed and the assignment returned, Kasper says.

– It’s cool that we have so many opportunities and are encouraged to create and use our skills, Ron says.

Ron, Aarni and Kasper are quite modest about their relation to culture before their studies. Yet, each of them has a proclivity towards the cultural fields with applicable experience and understanding of the challenges in cultural fields. All of them share a passion for music.

Ron, 26, comes from a business and administration background. He says he didn’t have any real experience in working in cultural fields, but he had made music for 10 years.

Aarni, 25, had experience in event production, which had helped develop his visual skills. Music and different types of cultural hubs have become familiar to Aarni through hobbies and work.

Kasper, 21, says he had no experience in working in the fields of culture before his studies. Kasper applied to Humak straight out of grammar school.

– I decided to apply to Humak because music and the music business have been interesting to me for a long time. I’ve really liked my time at Humak, says Kasper.

Self-examination is the biggest reason I applied to Humak, Ron says.

– This is the kind of field I was interested in but never got the chance to study. I think applying to study here as bit older was a wise choice, because now I’ve got more tools to help apply my knowledge.

Aarni also agrees that studying at a later age is a good choice. His previous experiences include various cultural environments and business studies.

– I never completed my business studies, it didn’t feel like the thing for me, but it had elements that interested me, such as marketing. At my studies in Humak I get to apply what I learned into projects that are more interesting to me.

Setting Sights on the Future

Supporting culture development by acting within the field is very important for future cultural managers.

– Culture is a very important part of a community wellbeing, and it needs to be maintained. Even better if we can make community wellbeing be a part of our jobs by helping creators innovate all the while getting paid for it. That’s the best-case scenario, Aarni and others agree.

Ron is interested in working in radio, currently he has an internship at Radio Helsinki. Ron managed to get the internship position by using contacts made during his studies.

– A summer job related to 360° productions could be a good choice, says Kasper.

Future plans and ambitions for the group include working with the music industry, in event and video production, entrepreneurship and radio work. At the moment everyone is still waiting to see what else their studies have to offer. There’s no need to stress about the future, right now the group is focused on learning all they can from their studies.

– Your own initiative is important. It’s up to each student to make sure they get the most out of their studies. You need to absorb the information and make the best use of it. At Humak students learn tools for which to cultivate learning, Aarni describes his studies at Humak.

Ron says cultural management students need to be ambitious, because the cultural field is highly competitive. You need to have a drive to succeed in your chosen field.

– It’s hard to imagine any other degree which would give you as much freedom as cultural management studies. It’s always a benefit if you have a natural disposition for problem solving and decision making. Technical know-how is also a big plus.

Kasper agrees that cultural managers need initiative and ambition. He adds that support is always available if you remember to ask for it.

– Messages are answered within the hour and lecturers are available to chat with on Teams if you need to sort something out. The teachers have time for students, Kasper says.

– Outsiders might view this sort of independent method of study as exciting. I feel this style of studying suits me better, you get to express yourself and try out different things. Humak’s coaching pedagogy is pretty awesome, Ron says.

– Always keep planning new productions. If you feel you’d like to collaborate with someone, don’t be afraid to contact then. Good ideas are always in demand.