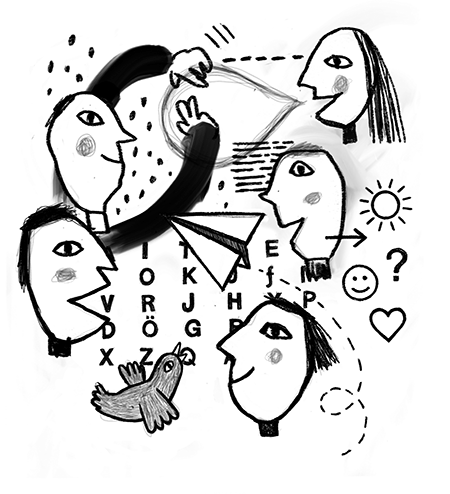 Multilingualism and multiculturalism can be examined from several different angles. This blog series focuses on discussing multilingualism and multiculturalism specifically from four different perspectives: linguistic and cultural repertoire, linguistic and cultural landscape, the connection between language and culture, and the identity of a multilingual person. Blogs will be published once a week on Mondays until May 9, 2022.

Multilingual Monday blog series explores multilingualism and multiculturalism from the perspectives mentioned above. I will also reflect on these topics through my own bilingualism and experience living in two cultures.

Each of us has a personal history of language and culture that is interesting to reflect on. Especially those who have grown up in a bilingual or multilingual family know how multidimensional and complex the linguistic and cultural landscape is. Those who have at some point moved to a completely new linguistic and cultural environment have also experienced the challenges and potential of multilingualism as well as reflected on their own and others’ attitudes towards diversity.

The phenomenon of multilingualism is encountered at home, at work, at school, in business situations or in leisure time. In this blog, I cite examples related to multilingualism and multiculturalism at home and school.

The Helsinki Term Bank for the Arts and Sciences defines multilingualism as follows:

According to the Cambridge Dictionary, the term multilingual means:

Multilingual: (of people or groups) able to use more than two languages for communication, or (of a thing) written or spoken in more than two different languages. (Cambridge 2022)

In this blog series, I will focus on multilingualism from the perspective of the individual and how these individuals use their languages as part of the community.

When discussing multilingualism, it is necessary to address multiculturalism as well. Language is never an instance isolated from culture – is always linked to the culture in which it is used. According to Professor Mikko Lehtonen, the concept of multilingualism has many different meanings depending on context. It can be used, for example, to describe the cultural diversity of society or as part of immigrant politics. According to him, the multiculturalism of a community is determined by how a community gets influences from the outside (Leppävuori 2015).

In a collection of articles edited by Mikko Lehtonen and Olli Löyty, Hans Magnus Enzensberger reminds us that there is no nation in the world with a homogeneous population (Enzensberger 2004, 32-34). Samuel Huntington defines multiculturalism as the coexistence of different civilizations in the same society. According to him, multiculturalism values group rights over individuals (Huntington 2003, 292-293). The Stanford Encyclopedia of Philosophy defines multiculturalism similarly as well – both language and religion are considered to be determinants of culture, and not so much race or ethnicity (Stanford 2022).

Multiculturalism – Germany as an Example

In Germany, cultural diversity has long been a norm. Due to, for instance, Germany’s geographical location and several waves of migration, as well as trade, wars and labor migration, Germany is a highly multilingual and multicultural country. 83.2 million people live in Germany. About 88 percent (= 73.2 million people) of the population speak German as their mother tongue. The remaining 12 percent (10 million) speak Russian (1.7 million), Turkish (1.6 million), Polish (1.3 million), Italian (0.9 million), English (0.7 million), Spanish (0.5 million) and Greek (0.4 million). In addition, there are other, smaller language groups. About one-fifth speak more than one language at home, of which the other language is usually German (Adler 2019, 213-214).

In Finland, this phenomenon is relatively young compared to Germany. It is only in recent decades that multiculturalism has become widely known due to increased migration, international relationships, and studying and working abroad. In 2020, there were 432,800 people living in Finland with a mother tongue other than Finnish, Swedish or Sámi – meaning 7.8 percent of the total population (Statistics Finland 2020).

Multilingualism and multiculturalism are part of everyday life in Germany. It is reflected both in the German street scene and the attitudes and interactions of Germans with different cultures. The Standing Conference of the Ministers of Education and Cultural Affairs of the Länder in the Federal Republic of Germany identified multilingualism as a resource to be supported (Kultusministerkonferenz 2019).

Multilingualism and Cultural Adaptation at Home

In a multilingual family, languages and cultural phenomena are mixed into one large entity, which can be called a family language and culture. Acculturation researchers study the cultural adaptation processes of individuals or communities in terms of, for instance, language, values, habits, identity, and religion.

The acculturation of multilingual and multicultural families has been studied by, for example, Jo Ann M. Farver, Bakhtawar R. Bhadha, and Sonia K. Narang. Their research focuses on Asian-Indian families who have moved to the United States. The study found that adults and children adopt similar ways of cultural adaptation. The most significant difference between children and adults is that children integrate and adapt to society much more easily than their parents. Children with an integrated acculturation style have significantly better learning outcomes and a more positive self-image than those who are isolated or discriminated against (Farver, Bhadha & Narang 2002, 11-29).

Multiculturalism and multilingualism at home can appear to be both a positive and a negative thing from a child’s perspective. I will give an example from my own childhood in this context. I grew up in a German-Finnish family and life was a perfect mix of German and Finnish language and culture. We ate Finnish Christmas food on Christmas Eve. Mom spoke Finnish to us children and read us bedtime stories in Finnish, while Dad did the same in German. I usually answered my mother’s Finnish questions in German and our conversations went very well. Many Finnish-speaking relatives and friends visited.

Sometimes I loved and sometimes I hated this mix of language and culture. I loved it whenever there were no potential bullies or mockers present. I hated it whenever it made me a weird, different lone wolf in a very traditional, linguistically homogeneous community. I sometimes used strange expressions in German, which I had translated directly based on the Finnish expressions my mother used. Mother also made us wear clothes that emphasized Finnishness or to go to school by skiing, which was shunned and ridiculed in the slightly narrow-minded Bavarian community.

Learning to Appreciate Multilingualism and Multiculturalism

Especially as a teenager, I would have liked to be completely “normal”. I understood the benefits of bilingualism and biculturalism only later in life and also learned to appreciate it. This scenario would have been an excellent research topic for, for instance, Susan S. Chuang and Catherine S. Lostigan, who study the roles and relationships of parents in immigrant families (Chuang & Lostigan 2018).

I speak German to my own daughters, Finnish to my Finnish husband and German to myself. As I am fully aware of how unpleasant “weirdness” as a child may feel, I have tried to avoid scenarios that might make the girls experience their own multilingualism and multiculturalism as a negative thing or that might risk them being ridiculed or excluded from the community. Fortunately, most young people in modern society have developed a much more international and tolerant attitude towards other people through education, social media and school than young people a few decades ago. This and the pride my girls take in their Finnish-German background have supported the positive development of their multicultural identity.

Multilingualism and Cultural Adaptation in School

Consideration of multilingualism and multiculturalism in the school world has been widely discussed in recent decades. We live in an increasingly diverse and multicultural society where many children and adults speak more than one language. The fact that a person has the competence to use several languages should be valued and utilized, and the use of several languages should be encouraged. Studies show that bilingualism stimulates brain development and also supports children’s cognitive development (Sigman 2017). The UK Association of Literacy (UKLA) is a British charity, according to which multilingualism is an asset and a resource that is not sufficiently valued and supported in the classroom.

According to Alayine Öztürk, Jamie Marshall and Liam Willimot, all teachers in schools with bilingual or multilingual children should be familiar with the language learning process of these children so that they can support them in the best possible way to reach their full potential. Teachers should recognize and value these children’s linguistic and metacognitive skills based on their cultural values, beliefs, attitudes, and experiences (Öztürk, Marshall & Willimot 2020). According to Rose Drury, practical work in the classroom requires reflection and understanding of how children acquire an additional language and how they could best be helped to learn that language (Drury 2007).

Effective language learning takes place in a meaningful context where there are planned opportunities for purposeful communication. Also included in this context is the understanding that cultural differences also affect language learning (Genesee 1987). Effective learning and teaching integrates language and content learning and provides opportunities for meaningful contexts in which the student reads, speaks and writes (Öztürk, Marshall & Willimot 2020).

Finnish National Agency for Education Recognizes the Importance of Multilingualism

Language use enables us to find our identity, belong to groups, and be excluded from other groups. The duty of schools is to develop and support the students’ linguistic identity so that the students are aware of and appreciate their linguistic resources and are able to utilize them in different situations. This helps students in reaching their full potential in school, leisure, and society in general. (…) Students’ diverse language skills could in many ways be a resource when studying different school subjects. In most situations, it is natural to guide students to search for information in different languages. Students could also produce some of the output in their own mother tongue or teach a sentence or even a related poem or proverb in their mother tongue to others (EDUFI 2022).

So far, there is still little researched information on how these goals mentioned by the Finnish National Agency for Education have been realized in practice in the classroom. Maisa Martin reflects on what must be done in terms of multilingualism from the perspective of the teacher. The teacher should be aware of the students’ language skills, understand the social nature of language in building meaning, and make sure that there is room for the formation of students’ linguistic identity in the teaching of their mother tongue (Martin 2016, 3rd).

Multilingualism and multiculturalism are present in our daily lives and it would be desirable for both to be better understood as a wealth and a great resource to be utilized not only in schools but also in the workplace and in all social spaces where people from different linguistic and cultural communities meet. This requires citizens to have a more tolerant attitude and interest in otherness and diversity.

The Helsinki Term Bank for the Arts and Sciences 2022. Accessed 12.2.2022. https://tieteentermipankki.fi/wiki/Kielitiede:monikielisyys (In Finnish)