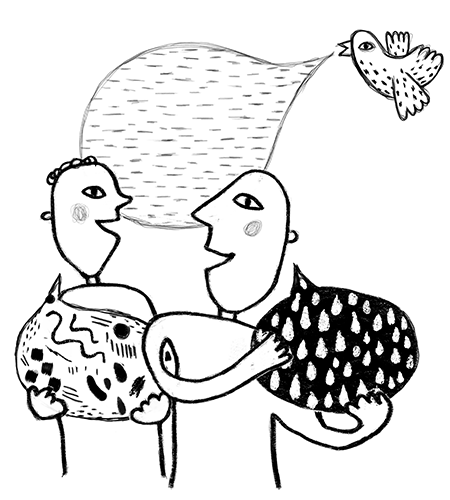 Blog 2: Linguistic Repertoire and Its Use From the Perspective of a Multilingual Person

Linguistic repertoire refers to the collection of linguistic resources that a person has accumulated over the course of their life and that they utilize and interpret in their interactions with other people (Blommaert & Backus 2011). According to the Council of Europe, all of us are potentially or practically multilingual. The linguistic repertoire may include languages that a person has learned since birth and also languages that they have learned in school, clubs, courses, through television, independently, etc., for which they have different levels of proficiency (including small talk, everyday conversation, listening and reading comprehension, production of spoken and written language, work communication, academic communication, etc.).

In addition, it must be remembered that the linguistic repertoire is not a static instance. Instead, the content, purpose and competence of this repertoire, as well as the roles of the languages within it may change during life for various reasons. One reason for changes in the repertoire may be, for example, moving to an environment where another language or many different languages are spoken. As a result, the use of previously used languages may decrease and thereby weaken, and another language may become stronger. The linguistic repertoire can be compared to a color ball moving and slowly deforming inside a lava lamp.

If I look more closely at the list above and only pay attention to linguistic competence, there is massive variation when it comes to my abilities to read, speak, understand, and write these languages. Some of them I would only be able to use for basic greetings. Some of them I am able to use even in academic contexts. Others, on the other hand, land somewhere in the middle.

This phenomenon is not at all black and white, however. Despite the fact that I have lived in Finland for 20 years, German is my strongest language because it is my mother tongue and I always think and feel things in German. However, it must be acknowledged that German is not my strongest language in all situations of life. For example, I would not be able to handle issues related to social services (child benefit, study grant, etc.) in German as fluently as in Finnish, because I have never needed the relevant vocabulary in German. Nevertheless, German is and will remain my most important language overall. Today, however, Finnish is my most important language of use as I definitely use it the most in everyday communication.

Multilinguals’ Language Use at Work and at Home

In what language does a multilingual person think and act and for what reasons? Why do some languages go completely unused even if they have been learned in school and there are opportunities to use them? My Finland Swedish colleague and I compared our language use in our work. The conversation was interesting because we are both multilingual.

The discussion revealed that the differences in our language use are quite significant. We both work at a university whose main language is Finnish. That is why both of us use Finnish quite much every day. My colleague also said that they tend to think in the same language they use in a particular interaction or task, which depends on the situation. They justified this choice on the grounds that it is practical and effective to continue thinking in the same language in which the matter was handled originally, as it avoids time-consuming translation work.

Personally, I process all things in German – that is, I think in German while I am writing in another language. Over the years, it has become a very fast and automated way of working. It is almost as if there is a really quick translator in my brain.

This approach is probably due to the fear of losing my mother tongue and my own identity and culture with it. This, in turn, has led to a strong need to keep my own native language level excellent. That was not always the case before. In my early years in Finland, my most important language goal was to learn Finnish as well as possible. Back then, I could not imagine that 20 years later I would be watching German television shows just to hear some German.

After about four years in Finland, I found myself in a linguistic vacuum. I still did not know Finnish well enough to express all the linguistic nuances. At the same time, my German was rusty because I had consciously not used it to learn Finnish as effectively as possible. This phenomenon made me thirst for the German language as well as for writing and reading.

Utilization of Different Variations of the Same Language

Finally, it is worth noting that an advanced language user is able to utilize different variations of the same language in different situations. My friend said that they have quite consciously used literary language in a job interview instead of his strong Northern Ostrobothnian dialect and spoken language. When I asked them why, they laughed and replied: “To make me look smarter and more educated. And because I want that job. I spent a lot of energy thinking about my own language use during that interview.”

I may not completely agree with that. I think we can proudly use whatever language feels right in the hope that the people with whom we are in dialogue will be open-minded and tolerant. In addition, we should feel free to use our entire linguistic repertoire whenever possible. So let us forget the pressure to be perfectly correct that school has sadly taught us in the past and, instead, boldly speak wrong and without fear of mistakes. The most important thing is being able to communicate with others, to understand and to be understood.