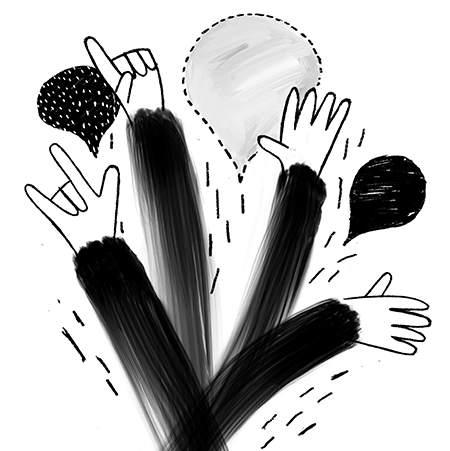 Blog 6: Changes in Language Relations and Responding to Them in Finland

I became the first lecturer at Humak’s Helsinki campus in 2001. Back then, a group of students, about half of whom were Finnish and half were deaf users of Finnish Sign Language, begun their studies. So from the beginning, the campus was multilingual. The absolute strength of that group was that the students used foreign languages with each other and learned another language of interpretation that environment. In this way, students learned and embraced both languages and cultures.

In his poem, Bertolt Brecht has written that Finns are a nation that is silent in two languages (Brecht 1940). I belong to a generation whose language teaching focused on competence. Mistakes were frowned upon, good grammar and perfect pronunciation were valued. That killed the will to communicate in a language other than Finnish and raised the bar to the heavens at the expense of trying. I, too, drifted on strange paths. I only used Finnish and Finnish Sign Language.

Fortunately, the world and attitudes are changing, and so has my own attitude. I gradually realized the importance of languages and especially language skills. I began to respect the courage and skills of those who have moved to another country. I understood that the most important thing is that we are able to communicate with each other – not native-like speech. Perfect pronunciation and grammar are not as important as finding a common way to understand each other and being able to get things done and take care of matters.

According to the multimodal notion, we can always use drawing or gestures if we don’t know a certain word or if we can’t write or pronounce it. There is not just one linguistic way of communication – the only thing that matters is that the matter is handled. I remember one time someone wanted pizza and decided to draw me a picture of it. The pizzeria was found. It is not easy trying make an understandable drawing of a pizza with a pencil!

Having worked as a study counselor at Humak for a long time, I have encountered many students. Most of them have been Finnish. Many are users of Finnish Sign Language. I use both of these languages on a daily basis.

In recent years, students have become increasingly interested in internationality and exchange studies. Humak students go abroad, and students come to Finland from abroad to study Finnish Sign Language and interpretation. Next academic year, we will be welcoming one Spanish and three French exchange students. Over the years, we have only had one English exchange student, but English has been a useful common language regardless of where the students are from.

In the guidance and counseling of international exchange students, our common language is English and Finnish Sign Language spiced with international elements. Although the idea would be for students to learn Finnish and use it, that has mostly remained a mere fantasy. The students’ thirst for information is huge and they must get answers that are as comprehensive as possible already at the stage where they are still planning their studies in Finland and at Humak. This means a lot of email exchanges in English. Both our country, our city and, of course, the studies and implementations on offer must be presented with a marketing aspect in mind but also by stating facts: it is dark and wet in Finland from October to December, people retreat to their homes and yet we are cordial and willing to meet.

There are many questions and there are still many when students have started their studies. Cooperation with tutors and lecturers in charge of the courses is important.

To my surprise, I have started to use Swedish as well and I have enjoyed it. People do not always have to switch languages for me, I can do it myself – and I do it with joy. In my work, I have been able to establish relations with Finnish-Swedish parties. I think it would have been unfriendly to start building cooperation in my own language. I prefer to respect the other party and their own language, make it easy for them, and of course hope that my language skills are sufficient for polite phrases. I have also needed these skills in counseling for Swedish-speaking students. They do know Finnish, but learning a profession is certainly easier in their own language. They are allowed to use Swedish material and do their learning assignments in Swedish. For my part, I write my instructions and feedback sometimes in Finnish and sometimes in Swedish.

So I no longer think I need to know languages perfectly. I understand that I don’t have to be a native speaker of a language. Communication is cooperation. It involves helping the other and being attentive to the other, encouraging the other, and encouraging oneself.